I was introduced to these spoiled walks by my father and grandfather.

My grandfather lived in a little house on the first fairway of a municipal nine holer in the mountains of North Carolina. I vividly remember early mornings in the aptly named Great Smoky Mountains. We would pack two or three clubs that he had cut down for me into a golf cart with his clubs and a tall cup of coffee and set off to play. I quickly learned that golf is hard but the time I got to spend with my grandfather on the course was about much more than learning to hit the ball straighter and farther.

A few years later, we moved to Michigan just in time for the 1985 U.S. Open and watching a major as a kid had a huge impact. I spent my summers soaking in the history of golf and Oakland Hills C.C's part in the story. Volunteering at the 1996 U.S. Open allowed me to watch Tiger walk the fairways in one of his last tournaments as an amateur. I was a Marshall at the 2004 Ryder Cup and got to experience the crazy energy from inside the ropes on 16. Of course, most days were just spent playing golf, tennis, and eating hot dogs (and later drinking coffee) at Iris' Shack by the 18th green.

Coffee roasting became a passion of mine a little later in life when I moved to the epicenter of the "third wave" of coffee, Los Angeles. I quickly found that shared stories over a cup of coffee are like those shared on a golf course. They’re bigger than just the story itself. There's a soul to coffee, and to golf, and we created Good Walk to celebrate that intersection.

Why a golf coffee company?
Golf emphasizes fair play, honesty, and abiding by the rules even when no one is there to hold you to them. These are traits that are supposed to instill character and shape people into the good citizens that we wish our world to be filled with. They are traits that we use to guide the business principles of Good Walk Coffee Company.

"Leave the course better than you found it." Whether it's fixing divots or repairing pitch marks that aren't yours, there's a responsibility that we learn early to collectively take care of our environment. At Good Walk Coffee we will always look to carry products and select materials and processes that have a minimal impact on our planet.

Golf is an old game, a slow game, a game of endless frustration that is impossible to master. It is a game that, with one shanked hosel rocket, can make you want to sell your clubs and quit playing forever. And with the very next swing, a pured iron shot that nestles up next to the pin, has you thinking “I never want this round to end.” It’s an experience that can be a lot like life and business. In both, you experience ups and downs. But in the end, you grow in ways you weren’t expecting and you wouldn’t change the experience for anything.

Will it make me play better?
Coffee has many performance benefits that are useful to golfers. It heightens focus and mental acuity. It has anti inflammatory properties that help muscles recover and perform better. It reduces perceived exertion and helps maintain energy during a round. Also, a good cup of coffee, like golf, makes your day better. 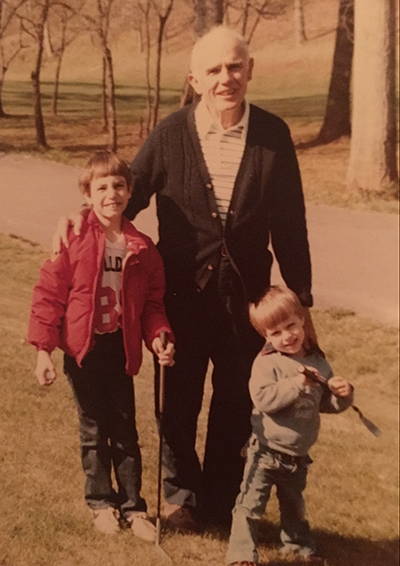 Getting ready to swing a few at Franklin Golf Course, 1982